The original hack is a command-line / Terminal tool, credited to Jeremy Drake and a number of other contributors, dubbed “tivodecode.” From there, a good how-to was written by Dave Zatz, and although it was written well, the method isn’t exactly user-friendly. From there, other folks put together some Automator actions, droplets, etc, but there’s only one that I’ve seen so far that actually works like a Mac app, and that’s TiVoDecode Manager, by David Benesch. END_OF_DOCUMENT_TOKEN_TO_BE_REPLACED

8 Comments
Dec
17
Links from Around the Mac-o-Sphere

Here are a few hopefully useful and informative Mac-related links found both on the MacCast and elsewhere on the series of tubes.

Just in the past few days, the digital protections (or DRM) in which TiVo wrapped its recorded programming were defeated to allow the content to be played on a consumer’s networked device of choice. And I’m sure I’m not the only member of the MacCast community who has been waiting for the TiVoToGo functionality, but I’m excited at the possibility of watching even more recorded content on the go.

What I find interesting is that in the few days since this hack was made available, some previously held DRM hostages are wishing they had never been freed. END_OF_DOCUMENT_TOKEN_TO_BE_REPLACED

I’m sorry, but this is going to be a bit of a rant…here goes.

Today’s article in the Financial Times titled Studios push anti-piracy rules on Apple reports that the studios are pushing for tighter copy-controls on Apple’s iTunes movie distributions. They write:

After months of discussion, a sticking point has emerged over the studiosâ€™ demand that Apple limit the number of devices that can use a film downloaded from iTunes.

And in the very next paragraph, FT.com states that the studios want to avoid piracy—demanding that Apple introduce a new distribution model for movies. END_OF_DOCUMENT_TOKEN_TO_BE_REPLACED

If you are in the US and were watching television last night, you might have been pleasantly surprised to see a new Apple commercial. This new one was for the iPod shuffle, which showed how amazingly small it actually is. The ad gets away from the previous iPod silhouette spots, and instead has a series of people clipping the 2G shuffle to their clothes. The transition effect between each person is neat—all you can see is the torso of each person, and a new one is introduced by removing or adding clothes (don’t worry, it’s G-rated) and then clipping on the new shuffle.

You can see the ad now on Apple’s website here.

If you haven’t seen it on any of the mac rumors websites, Forbes is reporting:

The report also claims that Hon Hai Precision Industry Co Ltd will also be called on to produce a 15 MacBook (Pro?).

The article gives no details on the phone specifically, except to say that the contract was for 12 million units and that Apple is expected to introduce the mobile phone in the first half of the year.

I didn’t realize it, but comic books are being distributed digitally and online. You can buy 40 years of the X-Men comic books archived in PDF format and saved on a DVD for $39 ($39 for 485 issues, unless I’m missing something, that’s $0.08 a pop). Yes, there are some collections that are distributed via BitTorrent are privately scanned and are likely infringing—but there are also many independent authors and publishers who are selling their wares online for very reasonable prices. END_OF_DOCUMENT_TOKEN_TO_BE_REPLACED 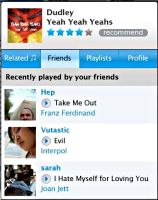 iLike is a free service that integrates with iTunes that not only helps you discover new music based on your personal tastes, but also can put you in touch with others with similar tastes.

iLike is a service by the folks who brought you Garageband (the website, not the Apple iLife application), a site for indy bands, musicians, and their fans. iLike helps you, the listener, find other like-minded listeners and similar-sounding bands based on your current music library and song plays. I know Adam’s talked about iLike and you’ve written in and provided other examples for similar services, but I thought it would be worth taking a closer look at on the MacCast blog. END_OF_DOCUMENT_TOKEN_TO_BE_REPLACED

Leave A Comment
Nov
05
Back to Basics: Safari and RSS

You know all about surfing the web. You’re a power-surfer! You keep in touch with your favorite websites every day. You open links in new background tabs to maximize your time and screen real estate. But do you know about RSS? This post is a quick glimpse at how you can keep up with your favorite websites far more efficiently, all within Mac OS X’s built in browser, Safari 2.0.

Depending on who you talk to, RSS can stand for “Rich Site Summary” or “Really Simple Syndication,” and I think both help to describe what RSS does—respectively from two different perspectives: readers and publishers. END_OF_DOCUMENT_TOKEN_TO_BE_REPLACED

I know Adam isn’t the biggest fan of the concept the rumored Apple iPhone. So, instead of talking about rumors, let us leave them aside for a moment and practically consider a scenario where Apple were to sell a mobile phone.

The “I wish Apple would make a” Syndrome

The consumer expectations bar is always high for Apple. The general public looks to it as a problem solver. Apple is a leader in thinking through technical tasks and making them easy for everyone. That’s why we’re always hearing: “I wish Apple would make a …”. And when I say Apple, I think much of the credit goes to Steve Jobs, who is nothing if not a perfectionist, and we’re all beneficiaries of it. END_OF_DOCUMENT_TOKEN_TO_BE_REPLACED