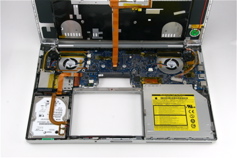 I personally can’t watch all those surgery shows on Discovery Health Channel. Seeing human innards makes my stomach turn. Seeing this is almost worse. The folks over at Other World Computing (OWC) have already performed surgery on a new 15″ MacBook Pro. It’s cool to see, but at the same time a bit horrifying. The good news is I already read on MacDevCenter that this model is easier to dissect than the current PowerBook. That should make things like future hard drive upgrades a bit nicer. I just hope the folks at OWC got this one put back together and working.

There are 9 comments on Gutting the MacBook: