New music, Not Alive by 8Stops7

Well, those are the boobs that make our laws. That’s the democratic process.

Well that is one way to blow an advertising budget. This new ad for Tekserve, an independent Apple reseller in New York, used over $60,000 worth of iPods toppling domino style to make their point. I wonder if those had any screen protection? For those of you in the area the ads will be running on the giant Madison Square Garden LED displays at 33rd Street & 7th Avenue, from May 1st through July 30th.

What’re ya gonna do with those *pies*, boys? 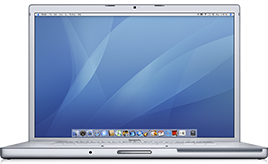 So I recorded a show last night (working to get it online as we speak) and of course I mention Apple may be planning on releasing the 17″ MacBook Pro. So, I get on-line this morning and BOOM there it is. How’s that for bad timing? Oh well. Look for a full rundown of the new larger MacBook Pro in the next edition, but for now here are some highlights. Note the re-appearence of the Firewire 800 port (YEAH!), too bad it will cost you at least $2,800 (USD) for the feature.

I was happy for the briefest moment. 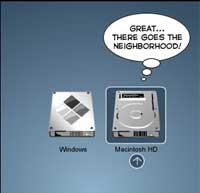 Be sure to check out this recent Joy of Tech. Funny

A podcast about all things Macintosh. For Mac geeks, by Mac geeks. Special edition. Interview with Ara Derderian from the HDTV & Home Theater Podcast. We discuss everything you need to know for integrating your Mac Mini into your home theater set-up. This show will help you understand the process and give you tips and tricks for making your media center Mac install a success. Enjoy.

So I says to him, I said “Get your own monkey!”

Listener Jonathan has a post on his blog describing the process he used to get Boot Camp running up and running using a Windows XP updgrade disk. Apple claims it can’t be done and I can’t confirm it, but there it is.

16 Comments
Apr
10
Getting something other than the MacCast?

Hey gang. I have now received several reports of people getting what is label the 4/9 edition of the MacCast, but the audio (and video in some cases) is something completely different. Well it looks like this is an issue with Libsyn, the company that hosts my files. To handle load they serve the files from a number of servers and when iTunes or your podcatcher request a file it automatically redirects your request to the best server available. Well apparently there is something screwy with that system (they just did upgrades). So if you received the wrong file just please try again. I am working with them right now to try and correct the issue. Sorry for any trouble or confusion this may have caused any of you.

A podcast about all things Macintosh. For Mac geeks, by Mac geeks. Show 131. Apple shelters its bottom line in Reno. MacBook as soon as May? The Boot Camp aftermath. Benchmarks show Mac as as good at running XP as a PC. Virtualization with Parallels Workstation 2.1 Beta. Mixed reactions to Boot Camp. What Boot Camp means for Apples future. Tip on using Spotlight in your Preferences. An OS X Vista joke.

New music, Stop and Start by The Bathtub Marys