Now another problem with this story is that while the headline on the Consumerist website clearly states it was a “refreshed” MacBook, most blogs picking up the story are reporting it as a “refurbished” model. The semantics are subtle but there is a big difference. END_OF_DOCUMENT_TOKEN_TO_BE_REPLACED

Promo for Billibub Baddings and the Case of the Singing Sword

A paperclip can be a wondrous thing. More times than I can remember, one of these has gotten me out of a tight spot. — MacGyver

I’m sorry, but this is going to be a bit of a rant…here goes.

Today’s article in the Financial Times titled Studios push anti-piracy rules on Apple reports that the studios are pushing for tighter copy-controls on Apple’s iTunes movie distributions. They write:

After months of discussion, a sticking point has emerged over the studiosâ€™ demand that Apple limit the number of devices that can use a film downloaded from iTunes.

And in the very next paragraph, FT.com states that the studios want to avoid piracy—demanding that Apple introduce a new distribution model for movies. END_OF_DOCUMENT_TOKEN_TO_BE_REPLACED

Much has been made of the delays in getting Adobe’s mission critical pro apps, including Photoshop, onto the Intel platform, a gating item for many PowerPC Mac users considering the move to Intel. The other software category experiencing major delays for MacIntel ports, perhaps slightly less mainstream, is that of audio plug-ins and software synthesizers.

Audio plug-ins are programs that run inside a host program, such as Logic or Garageband, and in many cases in “standalone mode” as well. Without major contortions, it’s fairly impractical to run PPC plug-ins inside an Intel-based host program and nearly impossible to run both PPC and Intel plug-ins in the same host at the same time (see this discussion thread on BigBlueLounge for a workaround that involves some third-party software). Plug-ins typically generate audio (by making sounds), transform audio (e.g., by adding delay or compression), or both, and represent a substantial after-market for the big audio programs END_OF_DOCUMENT_TOKEN_TO_BE_REPLACED

Existing users may update to the 2.2.1 version for free.

If you’d like to try Portraits & Prints for free for the rest of the year, request a full- functioning trial version from http://www.econtechnologies.com/site/Pages/Support/support_question.html.

I told you about the latest iTunes UK promotion involving a billboard in Piccadilly Circus on the latest MacCast. In case you missed it, Apple and Coke have partnered and placed a billboard at Piccadilly Circus in London. The billboard will occasionally display a code and when you use your UK cell phone to text the code to a special number you have the opportunity to win free songs on the UK iTunes store. Recently listener Brandon was able snap a few shots of the new signage (see Flickr links and YouTube video below) and the Coke+iTunes team handing out samples and vouchers for 5 free iTunes songs. According to Brandon if the billboard code word doesn’t change daily UK listeners can text “vibe” to 85100 up to 3 times for free music. Enjoy!

Update: Added the video of the billboard from listener Matt

Recently my brother was in a lecture at his University, and had to get up and go to the bathroom. To feel comfortable leaving his Mac unattended, he uses iAlertU, a nice little security application from Slapping Turtle that turns your MacBook’s speakers, iSight camera, motion sensors and screen into an alarm system capable of locking up the computer. It even takes a snapshot of the would-be thief and makes a noisy racket with a car-alarm like response, even if it’s just moved, let alone used.

Once the program is open, all you have to do is hold down the Menu button on your Apple remote to activate/de-activate your alarm. Of course, you should have your MacBook (Pro) paired with your remote for this purpose, otherwise anyone could ‘disarm’ your security system easily.

And it was when he was ‘arming’ iAlertU that he discovered something, much to the chagrin of other MacBook users in the hall below him: almost no one pairs their remotes with their MacBooks. Imagine the look on those in the hall as Front Row mystically opened on their screens. END_OF_DOCUMENT_TOKEN_TO_BE_REPLACED

New music, Life in the Stars by Berman

We don’t have to like each other. We’re family. — Home for the Holidays 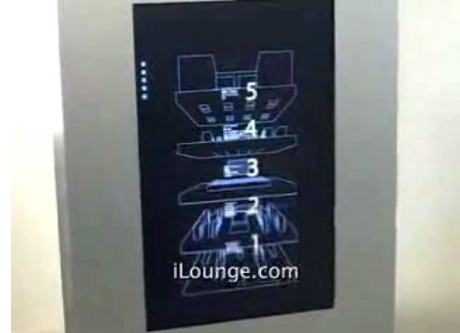 Normally I won’t cross-post from other blogs, but I just saw this post and the video below over on iLounge and it was too cool not to share.

“Found in the Apple Store in Tokyo, Japan’s Ginza district: as described more fully in this week’s Overseas Report, Apple has now outfitted the multi-story elevator entrances in Ginza with video pillars that explain the contents of each floor.”

Click here now get over to iLounge and chekout the video of this thing. You won’t be sorry.