New music, I Don’t Have a Job by The Majestic Twelve

Well I was just listening to the latest creation from the Leo Lapotre TWiT machine, Mac Break Weekly, and I heard them mention this little application for putting YouTube videos on your iPod. Since how to convert YouTube video seems to be something I am getting asked about more and more frequently these days, I decided to check it out. The app is called TubeSock (I know, great name) and appears to be the first creation from StinkBot. What makes TubeSock so great is the same thing that makes many of my favorite Mac apps great, simplicity. It does one task and does it well. There are other ways to save and convert YouTube videos, like through the use Firefox plugins, but TubeSock makes it a pleasure vs. a pain. All you have to do is launch TubeSock, copy the URL of the video you want to convert and hit a button. From there TubeSock takes over, downloads the FLV file (Flash Video File), converts it into a video iPod compatible H.264 video and drops it right into iTunes. Sync your iPod and go. Now that alone would be enough, but Tube Sock also lets you choose other output options. It has settings for PSP, audio MP3, Mac H.264 and you can even save the raw FLV file if you want. It will also let you choose different locations to save the converted video. TubeSock can drop the converted video into your Movies folder for easy viewing in Frontrow or you can choose to place it anywhere else on your Mac. Add to that the option to add a link to your Safari bookmark bar that lets you send videos directly to Tube Sock and you have by far the easiest way to make your favorite YouTube videos available when and where you want to watch them. 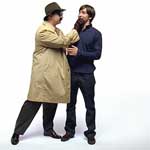 The lovable Mac and PC duo are back in 3 new Apple ads aired during the Primetime Emmy Awards Sunday night. Apple has posted the new ads and they are currently available for viewing in the Get a Mac area of Apple’s web site. The new ads are titled “Accident” which focuses on the new MagSafe power connector, “Angel/Devil” which highlights iPhoto books and “Trust Mac” which points out OS Xs current (PC neigh-sayers note I said “current”) lack of spyware. I realize all these ads, past and present, use a lot of marketing spin to make their points, but boy they sure are fun. Enjoy.

8 Comments
Aug
24
Parallels on Mac Pro not quite working?

I just received an email from a listener who pointed me to this thread on the Parallels web site that indicates there may be a problem running the current final release and Beta versions of Parallels on Apple’s new Mac Pro systems. Looks like the currently available versions of the virtualization software are causing kernel panics for a number of users. The Parllels team says they are aware of this issue and have made releasing fix a “high priority”, but don’t provide any timeframe for the release of a patch. One tech in the thread does offer a temporary work around that involves switching OS X into “legacy (32-bit) mode”, but does warn the workaround is “unofficial (untested and unsupported)”. To make matters worse, as of this writing Parallels does not appear to be making customers aware this issue anywhere on their site other than in the forum thread. This means there may be customers out there still purchasing Parallels for use on their new Mac Pro who will end up in Windows purgatory and be forced to use Boot Camp until Parallels releases a fix. Stay tuned.

Looks like Apple’s battery issues continue to escalate. On Thursday Apple issued a recall of 1.8 million Sony-built laptop batteries. The issue appears to be rather serious as the reports state batteries could overheat and catch fire. Apple has received nine reports from customer of lithium-ion battery packs overheating including two incidents where customers were burned. Just 10 days ago Dell computer issued a similar recall of 4.1 million batteries also manufactured by Sony.

This latest Apple recall effects PowerPC based systems and does not include the new Intel-based MacBooks or MacBook Pro systems, although some of those models are covered by a prior Apple battery replacement program. This new recall covers 12-inch iBook G4s, 12-inch PowerBook G4s and 15-inch PowerBook G4 laptops sold in the United States Worldwide from October 2003 through August 2006. If you own one of these models Apple is advising that you stop using the battery immediately and remove it from your notebook. Customers may continue to use their Macs while plugged in under AC power, but are asked to check Apple’s web site or call 1-800-275-2273 to see if a replacement is required. Replacement batteries will be provided by Apple free of charge.

New music, The Punk by Beep

Well this is a bit strange…. I just received an email from a listener who purchased a new Mac Pro (the 266GHz base configuration) and found something unexpected inside its beautiful designed enclosure. His new system arrived and while gleefully extracting it from the box he noticed an unusual, but familiar, “rattling” sound. This listener, who was a recent switcher, had built his own PCs so he could tell immediately that there may be a loose screw or two rolling around inside his new high octane Mac. He was obviously concerned and sure enough after removing the side door and carefully rocking the case, four (yes four) screws came plopping out (see the picts). These screws were each approximately 1 1/8″ long with 1/8″ thread at the end. After completing the screw extraction, he further inspected the inside of the case and fortunately could not see any empty holes where the screws may have originally resided. He went ahead and set up the new Mac and has been using the machine which appears to be working fine. After reading his email I encouraged him to contact Apple, which he did, and they seem to feel the screws must have “fell” into the case during manufacturing. They did advise him to bring the Mac in so they could do a thorough inspection, just in case. END_OF_DOCUMENT_TOKEN_TO_BE_REPLACED

Hey geeks. Sorry I have been delayed a bit in bringing you a new MacCast. I have been juggling some personal things and dealing with typical summer madness. If all goes as planned you should see a new show in your feed tomorrow. In the meantime, if you haven’t already heard the latest MacRoundtable you may want to give that a listen.

It’s about time someone recognized an issue faced by geeks everywhere. More power. As we add more and more devices to our techy lifestyle you need more and more outlets to power all your gear. Of course we all have those bulky power strips and surge protectors and they work, but you definitely wouldn’t call them “elegant” solutions. Admit it. Your cables are knotted up under your feet ready to reach out and ensnare your ankles like a giant octopus from the deep. And don’t even get me started on what you need to do when you have to take your Mac on the road. Most notebook bags just aren’t designed for that 12-inch monster power strip. Well it looks like the good folks at Belkin are feeling our pain too because they just annonced the release of their Concealed Surge Protector (USD$49.99) and their Compact Surge Protector (USD $39.99) and Clamp-On Surge Protector (USD$34.99) products. END_OF_DOCUMENT_TOKEN_TO_BE_REPLACED