In these days of countless stories of exploding Dell notebooks and massive Dell power adapter recalls, Apple has seemed relatively immune to these sorts of problems. Every once in a while, some odd thing came along, but it seemed like relatively calm waters. I fear, however, the sense of safety for Mac notebook users may be coming to an end. There have aready been hints of problems with the white brick adapters and scattered reports of various failures. Who can forget about the class action settlement around the previous Apple adapters?

Recently, I have had problems with my Apple PowerBook power adapter which has lead to me take a close look at their design and safety. With no apparent trigger, no visible damage or other warning of any kind, my adapter began to spew sparks and flames and burn the paper notepad on which it was sitting. Thankfully, I was literally sitting right in front of the adapter when it happened and I was able to instantly unplug it – but not before it damaged the paper notepad and my PowerBook. And it could have been much worse. END_OF_DOCUMENT_TOKEN_TO_BE_REPLACED

In his recent keynote Steve Jobs was quick to point out that 50% of the customers buying Macs at the Apple Stores are new customers. Now that is cool and Mac sales are obviously good, but one thing has been puzzling me. I only buy a new Mac once every 3 years or so and most Mac owners I know are at the same, or an even slightly longer, buying pace. Apple reported a 20% increase in Mac sales year over year for the 2nd quarter of 2006. So who is buying all these Macs? What is going on here?

One theory I have for this trend comes from an experience I had just last night, but the same scenario has played itself out many times over the past year. While at the Apple Store checking out the new Mac Pro there was a guy next to me doing the same. We got to talking over specs and other stuff and I soon discovered he was a recent switcher and was considering purchasing the Mac Pro for his business. He told me his first Apple purchase was an iPod and because of his experience with the iPod, plus the arrival of the Intel Macs and BootCamp, he felt comfortable enough with Apple to buy a MacBook Pro. After the MacBook Pro he picked up an 23″ HD Apple Cinema display to use with his aging PC, but the graphics card was not compatible with his old motherboard. He was now at the Apple Store to return the display and while there decided to just replace the old PC with a new Mac Pro and 30″ HD Cinema display. He also told me he may pick up a Mac Mini for his wife sometime in the near future.

So you see what is going on here?

This guy switched and in the course of a few months went from a PC user to the owner of (potentially) three Macs. And this is not the only story like this I have heard over the past year. Both Victor Cajiao (Typical Mac User) and Tim Verpoorten (Mac Reviewcast) switched and became owners of multiple Macs rather rapidly.

Macs are a disease (and I mean that in a good way). The Mac infects you and spreads like a virus. There is no cure and it will quickly be passed to family and friends. I myself have three Macs in my household which are all in active use and my immediate family, save one, are all own Macs. Now, I am not saying PC users don’t have multiple systems in their homes too, but often times their second PC is more of a toy for the kids and is used to keep real viruses out.

So I guess it’s true. Apple does have viruses. The good news is, the viruses are the Macs themselves.

If you saw the WWDC keynote the you saw the “PC Guy” from the Apple ads deliver a special message to the developers. In case you missed it Apple has now posted the video here. There is even an HD version available.

I am not really sure how I missed this one, but I guess (like many others) I was so blown away by the awesome specifications of the new Mac Pro that I didn’t notice an interesting omission. Now I need to give credit where it is due, because it was listener Scott who actually brought this to my attention, “Despite the great configurability of the new MacPro, did you notice you can’t add a remote control?… “The addition of FrontRow (also missing from the specs) with a remote would have been so nice!”

Ah ha, you see it now too. I guess Apple feels their Pro customers are too busy working to enjoy a little media experience on their Macs?

Now I am sure that to some people who purchase a new Mac Pro this may not be a big deal, but for other customers like Scott it does obviously matter. I think I tend to be in agreement with Scott on this one. The Mac Pro could really serve double duty as a nice secondary home entertainment device. It could be ideal our secondary forms of entertainment like IPTV, video podcasts and iTunes TV downloads. Note that Apple dropped prices on their Cinema displays and many of those buying Mac Pros will also pick up a 23″ or 30″ HD display. Wouldn’t that make a Mac Pro an awesome, and easy, way to add a media center to a spare room or den in your home? We all know that OS 10.5 will have FrontRow built in, so part of this omission will be solved then, but it doesn’t ship until Spring 2007.

There is no doubt that the Mac Pro is the king ca-macho macho of all Mac-dom, but there does seem to be a couple of niceties (FrontRow, Apple Remote, built-in Bluetooth and Wi-Fi) Apple has decided to reserve for it consumer customers. I would expect things to change when Apple releases Leopard with FrontRow in the Spring, but I guess for now Pro users will still need to rely on the great 3rd party solutions like Media Central to get their Mac media center fix.

UPDATE: I have to apologize. It looks like I made some editing errors and the audio files I sent out have some drop outs. I will be correcting the files today (8/8 @ 5:00 PM PST), so if you want a corrected file, please re-download. Iâ€™ll place direct links to both the MP3 and AAC versions at the end of this post. Sorry for the inconvenience.

A podcast about all things Macintosh. For Mac geeks, by Mac geeks. Show 153. A special edition of the MacCast covering the aftermath of WWDC 2006. get together with Victor Cajiao from the Typical Mac User Podcast (http://www.typicalmacuser.com) and we go over all the news from the Keynote and discuss our reactions and observations. We cover:
Mac Pros
OS 10.5 Leopard Preview
New Prices on Cinema Displays
New XServe
OS 10.5 Leopard Server
Apple poking fun at Windows and Vista

New music, Not on the Radio by Geoff Smith

Hey, hey, hey. Don’t be mean. We don’t have to be mean because, remember, no matter where you go, there you are. — The Adventures of Buckaroo Banzai Across the 8th Dimension (Special Edition)

Shownotes: HTML or OPML
Subscribe to the Podcast Feed or Get the MP3 or AAC (fixed) 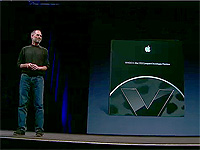 I am probably a bit late on this, but it looks like the video for the Keynote is now available. You can watch it here.

Astute listener Ope just emailed me to point out that we may have seen a glimpse of one of 10.5s new features long before WWDC today. Take a look at the last Apple iTunes “1,000 Songs” commercial for the iPod Nano+iTunes and then head over to Apple Core Animation page in the Leopard preview area of their site. The similarities are amazing. Looks like Steve liked the technology so much he had them make a commercial out of it.

Update: We’ll now that I have actually seen the keynote I know that this demo was recreated based on the TV comercial. The original commercial was animated and pre-rendered. The Core Animation demo was all generated in real-time. Awesome.

Oops. I was just checking out Apples Leopard preview pages and when I clicked a link from their iCal page to get more info on CalDAV. Imagine my suprise and confusion when I ended up on the California Connection, a personal web site for Candace and Roger. They look like they are car enthusiasts and probably very nice people, but I think they might see a slight increase in their traffic today. They should put up some Google AdSense ads quick to help offset their new hosting costs. ;)

The correct link is, http://www.calconnect.org/

OK. So the new MacPros are awesome of course and I really want one (no I won’t get one, but I still WANT one). Of course like all good Mac geeks I quickly hit the store and started playing with configurations. You can get a pretty nice new set-up, without an Apple display of course (display prices are lower though), for around USD$2,500.00. One bit of good news is that Apple is now including 1GB of RAM standard (all Macs should ship this way), but why and the heck do they think it is still OK to make AirPort and Bluetooth add ons. These are Pro systems, right? All the other models have AirPort and Bluetooth standard. Yes, the “upgrade” is only USD$79.00, but what is Apples cost? USD$20.00 in parts? Come on.

Just for fun I played with maxing out options (see graphic on the right). I opted not to get the Fibre channel card or the modem, but still checkout the price? Wow, at least I don’t have to fill it with gas to make it run. ;)

11:24 am Developer preview available today with Leopard to ship in coming Spring — That will be ahead of Vista. Yeah. Oops. My bad. I got overly excited. (although you never know with Vista)

11:14 am Enhanced iChat — multiple logins, visibility, animated icons, video recording, and tabbed chats, keynote presentations, back drops, photobooth effects, etc. Looks like some nice new and fun features. I hope voice recording quality is better than what we currently have in GarageBand. The PhotoBooth effects will be fun. Plus you have green screen so you can now be “anywhere” and have an iChat, too cool. I am sure business users will find being able to present Keynote presentations remotely a nice addition. END_OF_DOCUMENT_TOKEN_TO_BE_REPLACED