A podcast about all things Macintosh. For Mac geeks, by Mac geeks. Show 212. iPhone firmware 1.1.3 leaked. iTunes rental rumor strengthens. Apple stock climbs, analysts bullish. What CUDA stands for. Leopard Spotlight tips. Remote control your Mac from your iPhone with Telekinesis. Set-up an animated or video desktop. Make your iCal relationships complete. Share yourself and your Mac. What do you want me to cover at Macworld? Mac Podcaster Meet-up and Mac Mingle Party (details).

Even a poisonous snake isn’t bad. You just have to keep away from the sharp end. — Gods Must Be Crazy, The (1980)

One of those things that irks me about the iPhone and iPod Touch is that you can download iTunes music directly, but you can’t subscribe to podcasts. These two mobile devices are amazing because they free us from the traditional computer paradigm, but they just feel artificially limited by business model constraints. Fortunately, Matthew Smith is developing a solution called MobileCast that lets you download your podcasts directly to your iPhone, without having to first sync with your Mac or PC. Let’s take a quick lookâ€¦

MobileCast is a native iPhone app, not a web app. So, at least until Apple puts out their SDK, you’re going to need to jailbreak your iPhone / iPod Touch to install this app. If you’re running a recent version of the Installer.app, MobileCast can be found in the Multimedia category. Tap to install it, like any other app. After you exit the installer, MobileCast’s icon should be located on your Springboard (the home app menu). END_OF_DOCUMENT_TOKEN_TO_BE_REPLACED

If you haven’t heard of the video website Hulu, you must be living under a rock. For the past few months, it has been the site of controversy, hate, and mild like. For those who are living under rocks, let me sum it up for you. Hulu is a joint venture between NBC Universal (NBC, USA, Sci-Fi, etc) and Newscorp (Fox, FX, Fox Sports, and iHOR (International House of Republicans)). Both of them were tired of having their shows put up on YouTube, and felt that Apple was ripping them off, so they decided to make their own site. When I first heard about this site, I assumed the usual: No downloading, heavy DRM, no Mac/Linux, and only clips. Yet I signed up anyway because, lets face it, I am a sucker for a new web service (I am the guy who signed up for the Slingbox for Mac private beta even though I do not own nor have I ever owned, a Slingbox.) A few days ago I got the email that I had been accepted, and I delved into the website with the lowest of expectations. And those expectations were blown away. END_OF_DOCUMENT_TOKEN_TO_BE_REPLACED

Special Thanks to our Sponsors:
Smile on My Mac, check out the new DiscLabel 5

I don’t know what to say, except it’s Christmas and we’re all in misery. — Christmas Vacation (1989)

Marriage is punishment for shoplifting in some countries. — Wayne’s World (1992) 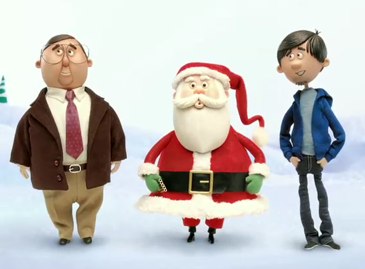 Thanks to all the listeners who alerted me to this wonderful new Holiday get a Mac ad posted on Apple’s site. The spot features a Rankin-esque Mac and PC along with Santa in a great spot from Apple. Happy Holidays!

I’m not usually one to toot my own horn, but this is just too cool not to share with you. A Maccast.com staff member just alerted me that the Maccast has earned a spot on the iTunes Music Store Best Podcasts of 2007 list. We were picked in the “Classic” category and, as we have discussed on the show before, in Apple language that means we’re the old guys on the block. I deliberately used the word “we’re” in the title of this post because this is an honor for you as much as me. This show exists because of the community that supports it and it is your continued participation, contributions, and feedback that make it great. Thank you. This is a great gift on the eve of the 3rd birthday of this show. There are a bunch of other great podcasts on the list. New comers and old. You can check them all out on iTunes now. BTW, Apple has also selected many of the “bests” in other areas including Music, TV, Audiobooks, etc. Hit the main page of the iTunes store to peruse all the best iTunes stuff of 2007. Thank you for another great year. I am looking forward to 2008.

A podcast about all things Macintosh. For Mac geeks, by Mac geeks. Show 209. French iPhones are scarce. Subnotebook rumors continue to heat up. iWork gets 16%, not bad. Overall Mac share may be up as well. QuickTime hole exploited. Studios squeeze Apple for more video dollars. Apple’s new NYC store opens. Jobs inducted into California Hall of fame. iPhone coming to Alaska. ‘Tis the season for Sharing. My Backup strategy under Leopard. Putting Widgets on the desktop. Manage iPhoto and iTunes remotely. Time Machine drive filling up fast. Change your login desktop. Great deals for the Holidays. Reading of “Twas The Night Before Macmas”.

New music, Carol of the Bells by Admiral Twin (iTunes)

Hey Mac Geeks, just a quick note to update you on when to expect the next show. A new Maccast is in the works and on the way, but I picked up a nasty flu bug near the end of the week and it took me out for a couple days. The good news is that after a couple days of getting good amounts of sleep (something rare for me), a lot of DayQuil, and drinking plenty fluids I am feeling much better. I will be up and around for the Loop in the morning and I hope to have the next episode of the Maccast on your feeds before the end of the day on Sunday.

I know, who would have thunk it, but when I was cruising Apples online store, there it was. Plus it was $20 cheaper than the retail versions for the consoles at $79.99.

Guitar Hero is a REALLY great game, and you can now jam comfortably in front of your Mac.

Here are the specs for those who wish to jam:

As you can see it’s a bit processor and RAM reliant. If you have the power then rock on!