May
15
BBC, the World’s Most Stressful Job Interview? 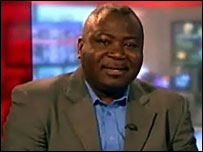 So what happens when you head to the BBC for a job interview and end up on the BBC news? Just watch the video and find out. This poor guy, Guy Goma, was at the BBC expecting to be interviewed for a job as a data support cleanser. But when he arrived he was somehow mistaken as an IT expert, Guy Kewney, who was scheduled to be interviewed about the Apple vs Apple court case. He was quickly wisked up to a TV interview which he mistakenly assumed was part of his interview. Karen Bowerman, the business presenter conducting the interview, quickly realized Guy didn’t seem to know much about the Apple vs. Apple case and cut the interview short asking just three quick questions. The whole thing was caught on tape and it is pretty funny. The video is available on You Tube and on the BBC web site. Watch the guys face as the segment starts, it’s pretty funny.

There are 10 comments on BBC, the World’s Most Stressful Job Interview?: