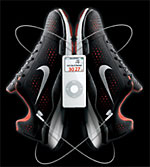 Whenever I think of running for a long period of time I can’t help but remember that scene from Back To the Future III (my favorite movie series of all time). Doc is at the bar and talking with a man from 1885 and telling him about the future (bad idea if you don’t want to disrupt the space time continuum). He says that they have great forms of transportation and the “auto-mobile”. The old man says “doesn’t anyone ever walk or run?”. To which Doc replies “oh, yes but for recreation”. And then the line that I always say, but no one ever catches on (because as I get older so do the movies) “RUN FOR FUN!”.

All that to say, that man had no idea what the future would hold for running. I have run over 250 miles in the past 12 weeks and so needless to say my running shoes were shot (actually the right heel started to cave in). So I was in the market for some new shoes. Well, me being the geek that I am planned it just right. Nike just released a new line of Nike+ shoes that work with your iPod Nano. There is a chip that you put in your shoe and that sends your speed and mileage to the Nano which keeps track of your run and displays the info on screen or via voice through your headphones.

There are 8 comments on Run for Fun: