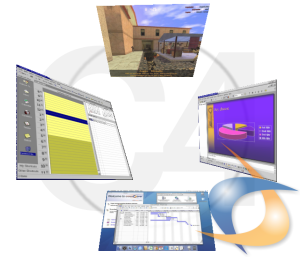 CodeWeavers has recently released a public beta of it’s CrossOver software to allow owners of Intel Macs to run certain Windows applications without needing to install Windows. I just downloaded a copy and while it certainly is not ready for prime time, it does seem very promising. The application is based on the work of the WINE project which is attempting to bring Windows 32 libraries over to UNIX. As such, there are only a limited number of Windows applications currently on the CrossOver compatibility list which are known to work at this time.I tried CrossOver out with Internet Explorer 6 and despite a few buggy display issues it seems to be running fine and the performance was acceptable. The CrossOver installation process is fairly straight forward. You install the app (drag to your Applications folder) and then run it. In the main window choose the option to install software and select from a list of compatible applications (there is also an option to install unsupported applications if you are feeling lucky). From there you will be able to install applications, assuming you have an installer file or install CD. For IE, Crossover actually was able to download the installer for me which was convenient. Once installed CrossOver performed a “virtual reboot” (screenshot #1, screenshot #2) of Windows and then I was ready to launch IE for Windows on my Mac. To launch installed applications you can run them from the ‘Programs’ menu in the CrossOver application or just double-click the Windows app which is installed in an Applications folder CrossOver creates in your Home folder. So I now have Internet Explorer 6 for Windows running on my Intel Mac Mini without needing to have Windows installed (screenshot #3). Not too shabby.

Now, this solution is not perfect. First, as mentioned earlier, there are a very limited applications available at the moment (gamers, note HalfLife is supported, although I am very curious about what kind of performance you’ll get). Second there is a lot that doesn’t work. In my short IE test I found that while Flash does appear to work, Active X, Windows Media and other plug-ins and add ons may or may not. Also there was an annoying display flicker when you moved your mouse over the page (and no, it’s not the known IE flicker bug). I would recommend only very curious early adopters and the brave at heart bother with this version of CrossOver. However, for those who do take the plunge it is very fun to play with and exciting to see the technology potential Intel on Mac has opened up. Being a web developer I know that even with only specific applications supported CrossOver could prove to be a very powerful tool for some people. For me the ability to run Windows browsers and test my web sites on one system with the minimal amount of fuss is a huge time saver. This is a nice preview and I look forward to seeing the final product.

There are 8 comments on Run Windows Apps without Windows: