Stuff, Guts, and Video posts are Hints and Tips to help get more from Apple’s Pro Applications.

There are at least three ways to perform most of Final Cut Pro’s functions; Onscreen Buttons and tools, Menu Selections, and Keyboard Shortcuts. While the novice FCP user will edit primarily with buttons and menus the professional learns and uses the keyboard shortcuts needed to get work done more efficiently. Developing a commanding grasp of the essential keyboard shortcuts is one key to editing quicker and smarter in Final Cut Pro.

Not every function in FCP essential to your video editing workflow will have a corresponding keyboard shortcut out of the box. Fortunately Apple provided tools to create new shortcuts or modify existing ones in Final Cut Pro 4.X and later. Here is a good example. To import files, you could use the Command-I keyboard shortcut, but if you have organized video, audio and still image in several folders it would be better to use the Import Folder command which has no keyboard shortcut. Here’s how to make one!

From the Menu bar Select Tools>Keyboard Layout>Customize (or use the Option-H keyboard shortcut) to open the Keyboard Layout Window, displaying a tabbed set of keyboard layouts and a function list. Each of the tabs across the top of the layout represents different combinations of modifier keys (Command, Option, Shift, or Control). The function list on the right provides quick and easy access to all of Final Cut Pro’s functions. 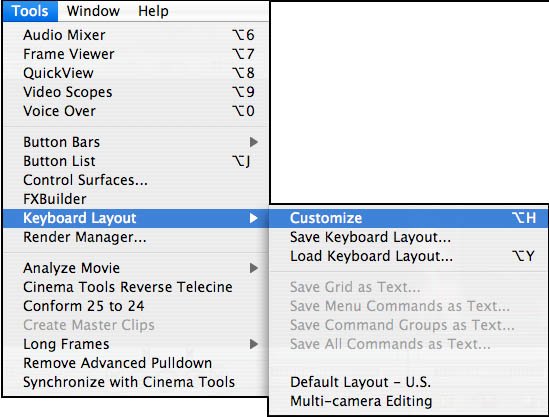 The next thing to do is unlock the keyboard layout in order to make changes. Click on the lock icon in the lower left corner of the Keyboard Layout Window.

Now decide what the keyboard shortcut should be. All of FCP’s functions and shortcuts are logically grouped together to make it easier to learn and remember them. The keyboard shortcut for importing files is Command-I, so we’ll want to stick with I for import and choose a modifier tab that has this key open. In the Not Modifiers tab you will note that most of the keys displayed already have function icons showing. A key with a function icon already has an FCP function assigned to that key. Click on each of the modifier tabs until you find one that doesn’t have an I key with a function icon. The Shift-Command tab will work.

Look at the function list. FCP Functions are organized first by Menu and then by function category. To locate the Import Folder command either click the disclosure triangle to the right of the File Menu option and scroll down until Import Folder command is displayed or type Import into the search field at the top of the function list which will then display only the Import commands.

Drag the Import Folder command over to the I key on the layout and you’re done. Close the Keyboard Layout Window and clck on the File Menu>Import and note that the Shift-Command-I shortcut appears next to the Import Folders command.

Repeat this process for any other FCP functions that you use that doesn’t have a keyboard shortcut.