Recently, we let you know about the availability of a new armband for your iPod nano. I received a set of the Sweats in the mail and wanted to let the MacCast community know how they worked out.

Out of the Box Experience

I received the promotional package of the iMojo nano Sweats in the mail—in the box were two sets, one regular size and the other XL. In each small box was a black and white armband, just like I had described previously, however an image insert where your nano would go was of the 1st generation (or 1G) nano. In the box was a letter explaining that these were production samples, but the image would be changed to display the latest and greatest 2nd generation (or 2G) nano. Other than that, they were what would be shipping later in October. The information on the box was clear and legible, with graphics that reminded me of a cross between those ESurance commercials and a Tikibar. Hip and fun. 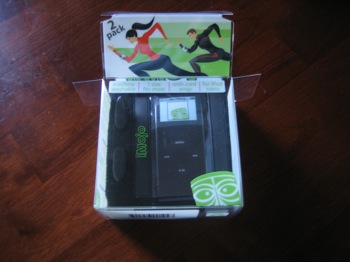 With nano in Tow

Having just purchased a new silver 2G nano for my wife, I was eager to see how well they worked together. Not having the sweats on my arm, the 2G nano slips in easily into the armband. The rubber stoppers hold it in nicely and prevent it from falling out. When the headphones and/or Nike+ running accessory is attached, the rubber stopper at the base of the nano easily flexes to allow for it to slide out. There is a slit in that rubber stopper that looks like it would allow the headphones to pass through, but it doesn’t line up—maybe it would have for the previous 1G nano? I’m not sure. Regardless, the nano functions properly even with the Nike+ accessory. 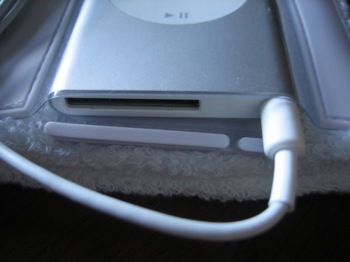 The clear plastic allows you to read the nano screen just fine and use the scroll wheel to select your favorite workout mix. On one side are two cleats that allow the headphones to wrap around and not get tangled. The Sweats fit snugly on your forearm and don’t feel like they will slide around even during a rigorous run. If the forearm placement doesn’t suit you and you have really thin arms, you could try sliding them further up your arm; or you might be better off opting for the XL size, which you can easily slide up around your biceps. If your forearm’s circumference is 12 inches or larger, you’re going to need the XL as well. When on the arm, just like a regular sweatband, the Sweats stretches and holds in the nano tightly. When stretched out on a forearm, it can extend about 4 1/4 inches, or about 3/4 inches longer than the 2G nano. 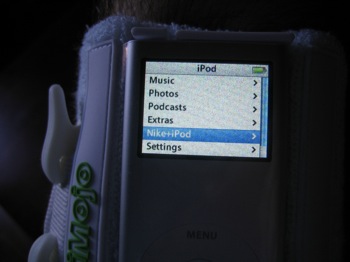 Since the nano Sweats is essentially a sweatband, I worried it might expose one’s precious nano to sweat (lovely thought!), but thankfully, iMojo had designed around that issue. The backside of the sleeve that you slide the nano into is lined in rubber, so you don’t have to worry about getting the nano dirty.

So, the real test—a workout. My wife tried the Sweats out while she ran to see how well it did the job. She’s been more accustomed to using her old iPod shuffle in a thinner armband on her biceps, so the forearm placement takes a little getting used to. She noted that the sweats indeed stayed in place and it worked just fine without any tangling or mishaps with the standard wired headphones. 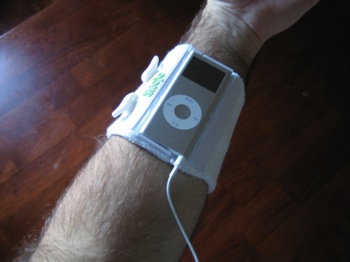 The nano Sweats armband on Alex’s sasquatch-like hairy arm, not his wife’s.

Being at the end of the summer here in Washington, DC, with a few hot days still left, she had never really appreciated how hot her forearm gets while running, since the Sweats take up a large part of her forearm and retain a lot of her arm’s heat. I asked her if she thought shifting the Sweats to the upper arm would make a difference, but she didn’t think so. On the cooler days, however, she didn’t notice the heat as much.

The Sweats armband is in the washing machine tonight using the directions given on the website. If it emerges unexpectedly messed up, I’ll make sure and post it, but I don’t expect any problems. 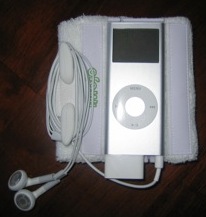 The iMojo nano Sweats are a good accessory for the active iPod nano owner. They perform as claimed, are thoughtfully designed and manufactured, and work well with the popular Nike+ nano accessory. If you live in very hot climates and are concerned about retaining body heat, you might look elsewhere. Otherwise, for well-thought-out design and price, the iMojo nano Sweats are a bargain—two for $24.95 US.

You can find out more about the nano Sweats on iMojo’s website.

If you end up buying a set and you have the opportunity, please let iMojo know that you heard about their product from the MacCast.

There are 2 comments on iMojo nano Sweats Review: