Mar
29
Black is the new Green 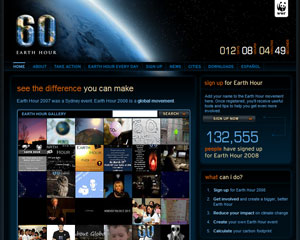 It looks like Google has darkened it’s homepage in honor of Earth Hour. “On Saturday, March 29, 2008, Earth Hour invites people around the world to turn off their lights for one hour – from 8:00pm to 9:00pm in their local time zone.”

The Earth Hour event was created by the World Wildlife Fund (WWF) in 2007 and was designed to raise awareness and support for fighting the effects of global climate change. I personally was not aware of the event until the Twitter from Scoble and I think it’s great to see Google supporting the cause. I personally will be sitting in the dark tonight from 8:00 to 9:00PM. Care to join me?

There are no comments on Black is the new Green: