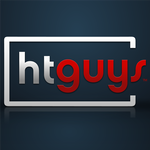 A podcast about all things Macintosh. For Mac geeks, by Mac geeks. A special episode of the Maccast. Ara Dererian of the HDTV Podcast is back and helps us follow up on how you can take your Blu-ray disks and get them into your Mac Home Theater set-up.

Tutorial: Backing up your Blu-ray Discs
Video from HTGuys.com