Jun
15
The HitchHikerâ€™s Guide to the Macintosh: Part 2

A Brief and Warped History of the Mac, part 2 (in which the Mac is born)

Welcome back to my column, where last week I left you all hanging in the story of the Mac. Appologies to anyone who felt cheated that we didnâ€™t get as far as the Mac last time donâ€™t worry, weâ€™re getting straight there this time.

We left the story in 1981, when IBM introduced its PC and threatens the market share of the Apple II. The PC was open to many manufacturers to improve with an architecture that allowed the computer to get faster as new chips were produced. Apple needed to step up its game with a new machine that would offer more.

Apple was already on the case, proposing three new systems in 1979. Two of these systems would be a successor to the Apple II and a new high-end work machine.

The third new system was to be a games machine and was given to Jef Raskin for development. Raskin, however was far more ambitious and started developing ideas for a low-cost, general purpose home computer. Raskinâ€™s favourite variety of Apple was a Macintosh. END_OF_DOCUMENT_TOKEN_TO_BE_REPLACED

A podcast about Macs done by a Mac geek for Mac geeks. Show 67. IBM claims Apple never told them about the switch, Transitive is behind Rosetta, ArsTechnica speculates on Apple Intel timeline, Cringley thinks Intel will buy Apple, Thoughtout ordered to stop using iPed name, Apple releases security update 2005-006, Apple and Nokia building browser for cel phones, Apple and 7-11 give away songs with Slurpees, OS X x86 showing up on P2P and IRC and Apple seeds OS 10.4.2 build. The MacCast One Minute Tip – Spotlight Secrets. Why Apple picked Intel instead of AMD, how to fast switch audio input, warning on the iTunes authorizations reset limit, why Kids and iBooks don’t mix, rebuilding the iPhoto library, tips for scheduled maintenance, using a Bluetooth phone headset for Mac audio, recommended apps for new Mac users and getting info on multiple items in Tiger. New music, Not so Shy by The Minors. You’ve never heard anything like this show and you may never want to. Shownotes: HTML or OPML

A podcast about Macs done by a Mac geek for Mac geeks. Show 66. The Apple Intel Special. The Mac Geek responds to the major announcement from WWDC 2005 and answers the questions: Why is Apple switching? Why Intel? What about the software? Won’t Apple sales go down? What about Games? Will Macs be less secure? Should I wait to buy a new Mac? Will there be a version of OS X for PC? Will I be able to run Windows on my Mac? All this and several listeners chime in with reactions and opinions. New music, Swoosh by Ton-O-Honey. That’s right. You heard me right. Now shut up and pay attention. Shownotes: HTML or OPML

I know, I know. You are all waiting to hear the MacGeeks response on the Apple Intel news and it is coming I promise. I just finished up the show notes for my Apple Intel response show and it’s 12:45 AM on Friday morning. I really need to get some sleep, so I will most likely be posting a new show tomorrow. I will also probably record a second show over the weekend just to catch up on all the other news, feedback and listener questions I have piled up. I hope the double dose of the MacCast will make up for the lack of a mid-week show. I was going to record on Wednesday, but that morning my trust old B&W G3, which served me well for 6 years, decided it was time to retire. So, I got a shiny new 20″ iMac G5 and I’m sure we’ll talk about that too. In the meantime I need your help. In case you were not aware yet, friend of the MacCast Mike Talmadge at Thoughtout.biz who makes the iPed stand received a cease and desist letter from Apple. Seems they are concerned we are all not smart enough to know the difference between an iPed stand and an Apple iPod. Read, Apple threatens company over usage of ‘iPed’ name over at iPodlounge to get caught up. After I heard about this, Mike and I had an interview and I will be filling you all in on what he had to say. Until then Mike would like to hear from you. Please send your thoughts, opinions, words of encouragement and alternative names for the iPed (just in case) to iped@thoughtout.biz. Mike was an early listener and supporter of the MacCast, so I would appreciate it if you could take a moment to help me return the favor.

($39.95 USD – DV version/ $349.00 USD – HD version)
Have you always wanted to make those animated movies made with clay or pipe cleaners? Camcorders are great for family films, but for a Claymation style stop motion movie you are going to need some extra software. That’s where Boinx iStopMotion comes in. You can try out iStopMotion with Boinx’s fully functional demo. Itâ€™s available on http://www.iStopMotion.com.

iStopMotion is just what an OSX program should be: powerful, yet amazingly simple. It has just a few important controls, and it lets you do the rest.

END_OF_DOCUMENT_TOKEN_TO_BE_REPLACED 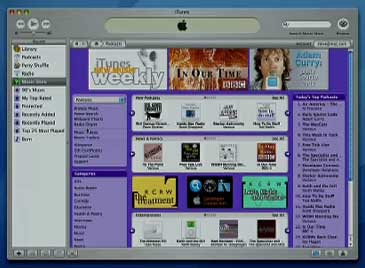 Looks like the MacCast may have made it into the iTunes 4.9. Take a close look in this screenshot from Steve’s keynote at the WWDC. If you look real hard at the list on the right side of the window it appears the MacCast is listed at #3. Pretty sweet. And I didn’t even have to ask or bribe anyone ;). Hopefully it’s still there in the final release. Thanks to Craig Patchett at Behind the Scenes for catching this and sending it too me. The image is from iPodlounge.com

MacCast listener George just sent me info about his new Podcasting book which is now available at Amazon.com. Here is what he has to say about it:

My co-author, Curt Franklin, and I are working on The Absolute Beginner’s Guide to Podcasting

It will be out in September (or earlier) from Que Publishing. As the title implies, it’s designed for readers who are coming to podcasting with little or no background in podcasting. It will be the perfect solution for your listeners who are barraged with questions from friends and relatives about how to podcast.

You also get more info about the book on the authors web site, http://www.ultimatepodcasting.com.

Editor’s note: I am providing information of books related to Podcasting because I have had many people ask me about it. Since these books are just becoming available and in fairness to all authors I am listing books for anyone who asks. The listing here is purely informational and in no way an endorsement from the MacCast. As I receive review copies and if I have time to read them, I will try to provide formal reviews. Reviews will be clearly distinguishable as they will be categorized in the review section of the web site.

(Freeware)
One of my favorite new features in OS X Tiger was the new “RSS Visualizer” that is hidden away in the screensaver area of Tiger’s System Preferences. When I stumbled on this gem, I was in awe. Even my die hard PC friends were so amazed that they immediately went online to find something that was comparable on the PC. They failed to find anything near itâ€™s beauty. My only complaint was that I use my Powerbook so much, I never really got the chance to use the RSS Visualizer. While balancing the pros and cons of doing less work just to get a glimpse of my new joy, I happened to find a neat little application that brings the Visualizer to my viewing attention a bit more. END_OF_DOCUMENT_TOKEN_TO_BE_REPLACED

Listener Rob sent in this link to his photos on Flikr