A podcast about Macs done by a Mac geek for Mac geeks. Show 74. Apple finally releases 10.4.2 update, ArsTechnica claims to know real reason for Apple’s Intel switch, reports of iPod Shuffle not playing some iTMS tracks and Apple quietly steers Cocoa developers away from JAVA. John Chambers and the MacCast One Minute Tip #3: Mac Mail. A warning about changing your home folder name in OS X, what to do if your iBook Battery will no longer holding a charge, a tip to quickly discover which groups a contact is in in the Address Book, a listener looking for a true 3-button mouse for OS X, tip on viewing iTunes .pcast RSS files, a great RSS tutorial on the MacCast forum and CocoaRadio, a Podcast for OS X Developers and power users. New music, The Blame Game by Rory Breaker.

That’ll do, Donkey. That’ll do.

25 Comments
Jul
13
I made the main iTunes Podcast page!

Woo hoo! Sorry I just need to be a little ego-centric today. I just made it into the featured technology section on the main iTunes podcasting page. I want to thank all of you, because without all the support from the greatest listeners in Podcasting I would not have been able to get here. Thank you.

10 Comments
Jul
12
The HitchHikerâ€™s Guide to the Macintosh: Part 4

A Brief and Warped History of the Mac, part 4 (in which the Mac readies a come-back)

Welcome back to my column â€“ and if youâ€™ve followed the story this far then you are truly a Mac Geek. Last week, under the control of Michael Spindler, Apple had not managed to do anything to improve itâ€™s aging operating system and were bleeding money.

With the arrival of Gil Amelio, Apple entered its make or break era. In his short reign Amelio presided over some of the things that have made Apple what it is today. But this part of the story starts not with Amelio, but with catching up with Apple founder Steve Jobs.

I know you were all waiting for his comeback, so Iâ€™ll get on with it. After being ousted from Apple, Jobs had been busy. In 1986, he bought the computer division of George Lucasâ€™s Lucas Film. This company cost $10 million and became Pixar. Pixar are still the leading company in computer rendering graphics and technology as well as producing 5 blockbuster movies with Disney.

Jobs also set up another computer company. His new vision was to create a computer that was elegent inside and out in every way. Everything from the motherboard design to the interface was created to make designers cry with joy. The company was called NeXT. END_OF_DOCUMENT_TOKEN_TO_BE_REPLACED

Snakes. Why did it have to be snakes? 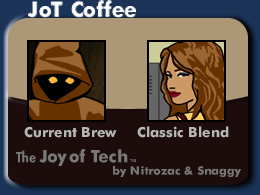 â€“ Chad Rebel (Free)
This review will be small, mainly because the application iâ€™m reviewing isnâ€™t very big itself. In fact, itâ€™s a widget. Day by day goes by with me working behind my desk and falling into a routine of PC applications one after the other. I rarely open the emails in my inbox that have the subject line starting with the phrase â€œFw:â€, because I rarely find a forwarded joke funny or short enough not to bore me. Donâ€™t get me wrong, humor is a big part of my life. For example, I enjoy the times that I remember to head over to the Geek Cultureâ€™s â€œJoy of Techâ€ website to catch their latest comic . They are usually short, funny, and not vulgar, but still meant for adults usually carrying a Mac theme. There are two widgets to choose from right now listed on their site to help you remember to stay on top of the funny. Out of the two, I recommend the JoT Coffee Widget. END_OF_DOCUMENT_TOKEN_TO_BE_REPLACED

I am proud to announce the first edition of the enhanced version of the MacCast, the eMacCast. I am in the process of submitting the new feed to iTunes, but until then you can use this feed URL to manually add the subscription in iTunes (see instructions below). The eMacCast will be release a couple of days behind the regular feed. It contains the same content, but has chapters so you can quickly jump to specific parts of the show. It also features changing album art and hyperlinks to allow you to quickly reference relevant content. This special version of the MacCast is being produced my MacCast listener Mitch (thanks Mitch). We hope you enjoy this new addtion to the growing MacCast family.

4) That’s it the new eMacCast should begin downloading to iTunes. Enjoy!

*You may subscribe with any podcasting client, but will need iTunes 4.9 or a supported iPod to view enhanced content.

A podcast about Macs done by a Mac geek for Mac geeks. Show 72. HP adds iPod Shuffle to the mix, Firefox up an running on Intel based Macs, Dave Winer critical of Apples additions to the RSS spec, Apple counts down to half a billion iTunes songs, reports that some Motorola phones syncing with iTunes, a Brooklyn teen killed over an iPod and the “real” OS X code for Intel is leaked, maybe. I now know how to update my iPod you can stop emailing me now, Thanks. Help with keychain, Onyx has deleted all passwords, looking for audio journal software for the Mac, sortting iTunes 4.9 Podcasts by date, what to do when files open in the wrong application, forcing a re-index of Spotlight, using the Adobe PDF Plugin with Safari 2.0, thoughts on iPod replacement batteries, a follow-up on hooking your Mac to a TV wirelessly, help with Classic not booting after upgrading to Tiger and s special offer for free Alarm Clock Pro software from Koingo. Thoughts on the MacCast as an “enhanced” Podcast. My podcast set-up and advice on where to learn how-to do your own Podcast. New music, Marmalade Maggie by The Merediths.

If I had a million dollars, I’d buy me an llama or an emu.

Subscribe:
Standard Feed or Enhanced Feed* new!
*You will need iTunes or a supported iPod to view enhanced content.

8 Comments
Jul
05
The HitchHikerâ€™s Guide to the Macintosh: Part 3

A Brief and Warped History of the Mac, part 3 (in which the Mac sucks)

Welcome back to my column â€“ I am surprised youâ€™re still reading this given last weeks warning. Read on, but don’t say I didn’t warn you. In last weekâ€™s column, Apple had unveiled the Mac which was rapidly becoming a huge success in the design and graphics industry.

Following Steve Jobs resignation from Apple, John Sculley took on complete control of the company, and hoped to get the most possible from the Mac. He oversaw the Mac product line grow from the original Mac to a whole family â€“ the all-in-one Macs such as the Mac SE/30 that improved on the orignal Mac with a more powerful MC68030 processor and had a built-in hard disk â€“ and also the Mac II series of machines that came in large boxes with separate monitors. The SE/30 was the most powerful of all the all-in-one Macs and I actually have one. My SE/30 hasnâ€™t worked since a month after I bought it in 1998 for Â£20 from my college Maths tutor, the problem is that no-one fixes Macs that old these days.
Anyone whoâ€™s ever had a beige Mac will know the SCSI port, ADB port and Apple serial port used for printing and networking â€“ these were pioneered in the Mac Plus in 1986. The most innovative member of the new Mac family was the Mac portable â€“ the worldâ€™s first, umâ€¦ not really a laptop. In 1989, this machine was released â€“ it was big and bulky and not much lighter than the all-in-one Mac. It did pioneer the use of an active matrix LCD screen on a Mac though. END_OF_DOCUMENT_TOKEN_TO_BE_REPLACED

A podcast about Macs done by a Mac geek for Mac geeks. Show 71. iTunes 4.9 is here, iPod updater released, new more colorful iPods, free iPod Minis for college students with Mac purchase and 2nd Gen Shuffle rumors resurface. iTunes 4.9’s impact on the Podosphere, listing iTunes 4.9 Podcasts from other countries, how to convince your wife to let you buy a Mac, Firefox crashes in Tiger, some questions about the iPod Shuffle, connect your Mac to a TV wirelessly, the future of Classic after the switch to Intel, a case for timely keyboard repairs and replacing the hard drive on an iMac G3. New music, Forever by 28.

This is gonna be good, I can tell.