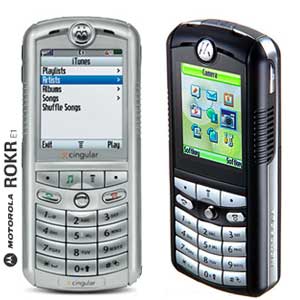 Several listeners have pointed out the fact the the Motorola E1 ROKR phone looks almost identical to the Motorola E398 (see picture). The obvious difference is the ROKR is white and adds the iTunes button, but considering the E398 has MP3 and MPEG4 support I think it is easy to tell that Motorola probably didn’t have to do much engineering on this phone. Some are already speculating on E398 hacks to add iTunes support. I still say it’s too bad Apple didn’t insist Motorola adapt the way slicker and cooler RAZR design especially in light of the Nano. I hate convergence as you know, but at least if you do it make it look cool.

There are 7 comments on Separated at birth?: