You can search far and wide. You can drink the whole town dry. But you’ll never find a beer so brown as the one we drink in our hometown. You can drink your fancy ales. You can drink them by the flagon. But the only brew for the brave and tru-u-u-ue comes from the Green Dragon! — Lord of the Rings: The Return of the King (2003)

Itâ€™s is actually much more than just a port, this is a significant update to Final Cut Express

The software costs US$299.00 or is available as an upgrade for US$99.00. System requirements are as follows and more information can be found here.

Matt Hoult is a freelance writer and blogger in the UK. In addition to writing for the MacCast and the Typical Mac User podcast you can find his personal thought and observations on Apple related topics at MattHoult.com. Matt is also currently interested in finding employment State side. If you have a position available please contact him at mailto://matt.hoult@gmail.com.
2 Comments
May
18
Jobs 5th Avenue Cube Revealed

ifoAppleStore has posted pictures of the new Steve Jobs designed glass cube that sits above Apples new flagship store in Manhattan. Workers began pealing away the black plastic covering the massive 32-foot-by-32-foot structure at 7:50 p.m. on Wednesday evening. After the unveiling it was revealed that this cube has a large white Apple logo suspended in the upper-middle of the cube. I am sure it will look even more amazing once the cube is lit. The Apple Store, Fifth Avenue is located at 767 Fifth Avenue at 59th Street and will have it’s grand opening tomorrow night (5/19/2006) at 6:00 PM. Steve Jobs is expected make an appearance. The store is also believed to be a test bed for new Apple Retail store innovations, as such, it will be the first location to be open 24-hours a day and may also be open 365 days a year.

Update: MacWorld posted these amazing pics from inside the store. The glass spiral staircase is unbelievable.

Inventive is looking for beta testers for the upcoming iClip 4. This new version is a major upgrade and features an all-new, stylish UI and much better performance.

iClip is a popular, award-winning multiple clipboard and scrapbook application with over 15,000 registered users worldwide. iClip enables users to quickly store, organize, and access snippets of information without having to save them as entire documents.

Well I am glad there are people out there who are willing to risk destroying a state of the art Mac laptop just so geeks like me can drool over their technologically advanced guts. I just hope for this MacBook there is life after death. 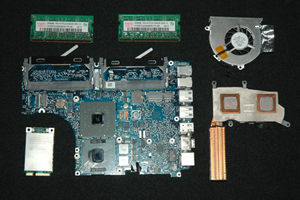 4 Comments
May
17
Macworld gets “Beneath the MacBook battery bay”

MacWorlds Jason Snell has posted a video that shows how easily you can get in and upgrade the RAM and SATA hard drive in your new MacBook. It’s amazing. After removing just 3 screws you have access to everything. Just slide the drive out and your ready to upgrade. Finally we have a Mac laptop with a hard drive that is as easy to replace as the ones in the PowerMac G5. Check it out in his article: Macworld: Mac Word: Beneath the MacBook battery bay

A podcast about all things Macintosh. For Mac geeks, by Mac geeks. Show 138. The MacBook is here and it’s awesome. Creative hits Apple with the “Zen” lawsuit. Security researcher claims some flaws still exist after latest OS X security update. Now there is no iPhone. iLife ’06 applications updated. New Intel Mac firmware. Why a GB is not a GB? The mystery of disk storage sizes. Select your BootCamp startup volume with your Apple remote. What to do if your keyboard is not responsive in XP under Bootcamp. The 64-bit question, has Apple moved backward? What applications have VoiceOver support? My Interview on Mac Tips Daily

Correction: Looks like I didn’t read the MacBook specs closely enough. I incorrectly said the SuperDrive in the new MacBook was dual-layer. The dual-layer support is for reading only and not writes. Sorry for the confusion.

New music, Daytime Soaps and Shattered Hopes by Sweet Diss and the Comebacks

With consumer and professional expectations in portable computing coming so close together over the past few years it’s really become apparent that Apple has taken this on board. With todays introduction of the MacBook, Apple is now offering very similar machines for very different tasks. Their newest addition to the line-up of Intel based Macs, which so far have directly replaced their PowerPC brothers; is the 13″ MacBook.

As expected this new iBook replacement is indeed named the “MacBook” and fills the consumer portable quadrant of Apples marketing plan. It bears many similarities to the iBook, but also to the MacBook Pro which should suggest a good starting point. Available in 3 models options there should be plenty of choice available for the consumer level Mac user and MacBook should leave few people wanting more. The MacBook can already be picked up in US Apple Retail Stores and are available for shipping in 3 days from the Apple Online Store.
END_OF_DOCUMENT_TOKEN_TO_BE_REPLACED

Maybe I just missed it before, but it looks to me like along with introduction of the new “glossy” 13.3″ display on the MacBook Apple has extended the option to the pro line. The MacBook Pro now has a a free “glossy” display option (see below) for both the 15″ and 17″ model.

8 Comments
May
16
MacBook is Here!

OK. I am working on getting all the details so hold on. The quick specs are as predicted: 13.3″ widescreen “glossy” display, Intel Core Duo up to 2.0 GHz, 512MB of 667MHz DDR2 SDRAM, upgradable to 2GB, built in iSight, remote and FrontRow, built in Airport Extreme and Bluetooth, optical digital audio input/audio line in, optical digital audio output/headphone out, hard drive options up to 120 GB, pricing starts at $1,099.00 USD and is available in white or black. They continue the integrated graphics and shared memory trend for their entry level models using the Intel GMA 950 graphics chip. It also has Apple’s new MagSafe power connector. For now go to http://www.apple.com/macbook/ for all the juicy details. My first impression is these look sweet.

Dang. Looks like these things are already flying off the shelves. (Thanks to Colm for the link).