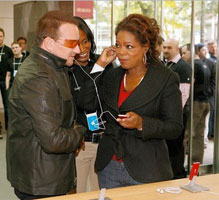 Listner Paul just sent me an email to let me know that it looks like Apple is in the process of replacing the silver Apple logo over the elevator and stairs at the 5th Avenue NYC store with a red Apple logo. My first thought was maybe they are getting ready for the holidays, but then I saw this post on Think Secret. Apparently Bono will be on the Oprah Winfrey Show tomorrow and will show off a special edition red iPod Nano. The unit will be a 4GB model wrapped in a special red case and will sell for the standard USD$199.00 price. USD$10.00 of each unit sold will go to Bono’s AIDS-awareness charity, (RED). RED then passes the money they raise to The Global Fund who helps women and children affected by HIV/AIDS in Africa. Until this launch (RED) products have oinly been available for purchase within the UK where they have special (RED) American Express cards and Motrola SLVR phones.

Update: Friday (10/13) Apple did release a special edition red iPod Nano. Also, the 5th Avenue Apple store in New York did have it’s logo changed to a red version. Thanks to Bill at iProng for the photo.

There are 7 comments on Apple going RED tomorrow? (updated):