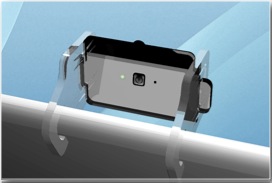 Mungai Mirrors, a UK company, has just announced a cool little device to turn your MacBook or MacBook Pros iSight into a quick and dirty DV cam. The device is called the Huckleberry and it’s genius is in it’s simplicity. It consists of a set of brackets and a small mirror that attach to the top lid of your Mac notebook. It fits just above the built-in iSight and effectively turns the iSight around allowing you to shoot video directly while monitoring what you are capturing on your Mac’s screen. Now one slight problem with the technique might be the “mirrored” image effect but, as the companies site points out, that is easily solved by using iMovie’s “Mirror” Video FX filter or by picking up a copy of eCamm’s iGlasses. Unfortunately the company’s site doesn’t seem to offer any images of video captured via the device so I can’t say what the quality is, but assuming there is no image loss this could prove to be a fun little gadget. The Huckleberry available for pre-sale now and is just £15.00 plus post & packing (shipping and handling to us Yanks). It will be launching at Mac Expo in London, October 26-28 2006, in partnership with Computer Warehouse and will be shipping in mid-October.

There are 3 comments on Mirror turns your MacBook iSight into DV cam: