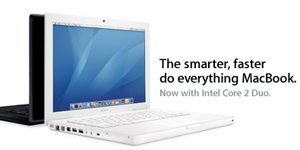 In an overview, the new notebooks sport Core 2 Duo processors, in the same speed categories as the original MacBooks (1.83GHz, 2.0GHz) with the 2.0Ghz models seeing a bump in 4MB shared L2 cache from 2MB on the 1.83GHz and former models.

Additionally, the new 2.0GHz MacBooks sport 6x DL-supported super-drives, a welcomed addition to the line which had a modest 4x super-drive originally.

According to Apple’s press release, the new MacBooks “are up to 25% faster than the previous generation”.

It’s not clear whether there has been many changes ‘under the hood’ yet, as the new Core 2 Duo MacBooks are designed identically to the previous models on the exterior. Some Apple fans and would-be MacBook owners have speculated in forums already that Apple has made revisions to the internal layout of the MacBooks to avoid continuing issues with shutdowns and heat, as well as other anomalies.

There are 7 comments on Apple Releases Core2Duo MacBooks: