The original hack is a command-line / Terminal tool, credited to Jeremy Drake and a number of other contributors, dubbed “tivodecode.” From there, a good how-to was written by Dave Zatz, and although it was written well, the method isn’t exactly user-friendly. From there, other folks put together some Automator actions, droplets, etc, but there’s only one that I’ve seen so far that actually works like a Mac app, and that’s TiVoDecode Manager, by David Benesch.

Hands on with TiVoDecode Manager

I should first say that this application is a “work in progress,” as the developer notes, “Some things may break as others are being fixed. Use at your own risk.” I would call it more than a proof-of-concept, maybe an “alpha,” (pre-beta software). It worked somewhat inconsistently for me before figuring things out and it may require many restarts and trashing of preferences to make it work more consistently.

To start things off, here are a few requirements:

That last bullet is really important. If you’re not willing to play around with this, you’re better off waiting just a little longer for others to exorcise the bugs. 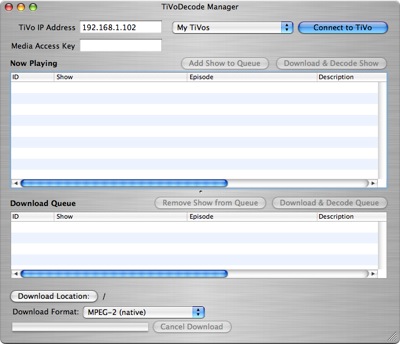 For those of you still with us, the TiVoDecode Manager’s interface is fairly straight forward, clothed in old-school brushed metal. Although the app can find my TiVo via Bonjour on the local network, it didn’t seem to want to input its IP address in the proper box, so I had to do that manually (if you don’t know your TiVo’s IP address, this link might be helpful). Next was to input my TiVo’s Media Access Key, you can find out more about how to obtain that here. From there, just click the “Connect to TiVo” button and soon you should see a list of the content stored on your TiVo.

There are two settings you might want to play with: your default download location (default is to your Desktop); and, the download format. As of version 1.5, the developer gives you the choice of MPEG-2 and MPEG-4 for iPod. The MPEG-4 support didn’t work for me and stalled my downloads (per the developer’s website, this MPEG-4 feature should be made Universal soon), so I just left it at the native MPEG-2, which worked fine.

For a test, I selected a 1/2 hour show on my TiVo, clicked the “Download & Decode Show” button, at the bottom of the window you should see a progress bar showing how much of the TV show your TiVo recorded is flowing to your Mac. These files are large—one 1/2 hour show was 800.5MB, so make sure you have enough room and a capable network. If you’re running wirelessly, as I was, this is going to take a while, because the TiVoDecode Manager is now only transferring the video file, but it’s also decoding it. You can only download one program at a time, and the app allows you to queue additional desired programs (hint: if you find that a download doesn’t start, especially after you’ve repeatedly asked it to download, try severing your Mac’s network connection to stop any downloads in progress, and then try again). 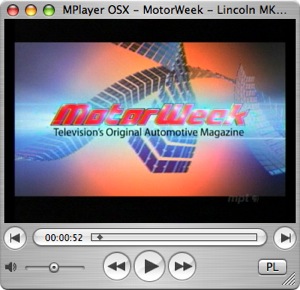 After a few tries (again, I said you might have to tinker!), I was able to watch an episode of PBS’ MotorWeek on my PowerBook with MPlayer, at what I believe is 640×480 resolution (sorry I can’t be exact, MPlayer doesn’t want to “show info” on the video). I haven’t tried transcoding the MPEG-2 video to another format for playback on other devices, mainly because I don’t have an iPod with video.

The TiVoDecode Manager is a good first step toward creating a user-friendly app that downloads your TiVo recordings to your Mac. Yes, it’s buggy and will likely try your patience, but in the weeks to come, expect this process to be smoothed out, and additional features added.

As a long side note: I’m still not really clear on the legality in the US of this app. Sorry for getting too technical, but in the US, under the DMCA, the circumvention of an “access control” like those on encrypted digital files, is copyright infringement. There are provisions in the DMCA that allow for reverse engineering to allow for interoperability of computer programs with other programs. I’m not clear if what this program does is actually circumvention, as it would require the TiVo subscriber’s Media Access Key, but combined with those reverse engineering allowances, the legal argument may exist. However, the functionality this software provides should be limited to downloading TiVo recorded content to your own Mac or your other unsupported devices, and should only be used for non-commercial or other fair use activity, and not for spreading willy-nilly over the Internet. It’s your responsibility as to how you use (or misuse) a tool—whether physical or digital. You may have read from my staff bio, that at my day job, I’m knee deep in this stuff. There are a lot of places to find out more about these digital rights issues—because so many Mac users are digital consumers and digital creators, I would encourage you to find out more.

There are 8 comments on Tapping into TiVo’s Content on a Mac: