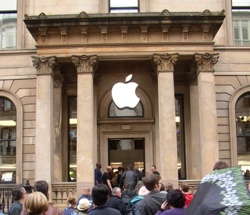 Just a few comments about the opening of the Glasgow store in Scotland on Saturday just gone. The store is at 147 Buchanan Street which is the major shopping street in Glasgow, and the store is located slap bang in the centre. I arrived just before 9am on Saturday and was somewhere between 5-600 in the queue. When I was in town about 7.30pm on the Friday evening there were 3 people queuing already so there had been some die hard fans there waiting. In terms of queuing time it took about 50 mins for me to get into the store itself as they fed people in about 20 at a time after the initial 100 or so.

On entering the store the first impression is of the amount of space there is between the door and the glass spiral staircase which is off to the left in the corner of the store. I expect this will be used for the bands that will be performing each Tuesday evening as part of the ‘Live From Glasgow’ special events that are planned. Upstairs next to the 2 Genius bars there are 4 iMacs set up on low tables with ‘ball seats’ specifically for use by kids – whether the location of these kids iMacs is specifically so that parents can be at the Genius bar have a convenient distraction to keep their kids happy, or just a happy coincidence I don’t know.

Whilst the Genius bars were operating the bookings made through the Concierge system weren’t being honored until Monday, but I was still able to get my Macbook reviewed for the discoloration of the bezel and trackpad that became apparent last year, and which I’d been waiting for an Apple Store to open locally for me to get resolved – I was able to leave my Macbook and have it repaired under warranty and available for collection the next day (1 benefit of getting in early ;-) ). The store was full of Apple staff (including quite a few US accents).

One thing I found interesting is that there did NOT seem to be an iPod HiFi on display anywhere, it certainly wasn’t next to all the 3rd party speaker systems, but I didn’t go around every display stand/ table.

There are 3 comments on Apple Glasgow Opening: