So over the last week Psystar has created a lot of buzz, controversy, and skepticism with their new Open Computer. They claim their system will run an unmodified retail version of OS X Leopard on non-Apple hardware. Now, EULA breaking legal issues aside, we know from the OS X86 Project, that it is possible to cobble together a beige box PC clone and make it run OS X. The thing is, to date no one has done it commercially and, as far as we know, Psystar has not shipped an Open Computer running OS X yet.

Today, Psystar tried to put all naysayers to rest by posting this video on their web site. They claim it shows their Open Computers running OS X Leopard, Ubuntu 8, and Windows Xp Professional. Now I am not refuting their claims, but as I watched the video I did notice some things that seem just too wonky not to point out. Besides I always love a good conspiracy theory. 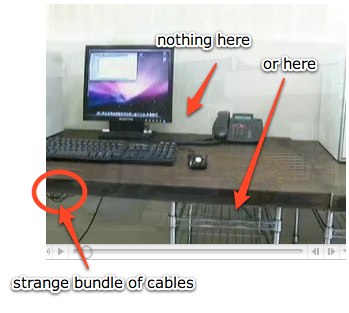 As the video opens we see the alleged Open Computer running OS X on the far left. There is a bundle of small cables under the desk below the system and it looks like they are probably Ethernet cables. Nothing too unusual but, as you will see, they later seem to disappear. Even more unusual is the space below the desk on the right where there is an empty wire rack shelf system. Note that at this point in the video there seems to be nothing there. Also note that the area to the right of the display is empty. These two points will become significant later. 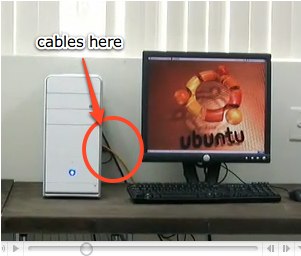 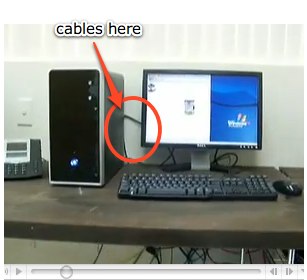 As the camera pans right we see the Ubuntu machine and the Windows box. Both have several cables coming out the side of the computer and running to the right toward the monitor. 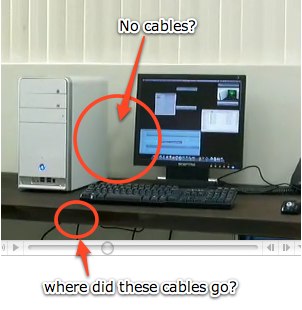 Now notice the Mac system… no cables coming off to the right like with the Ubuntu and PC systems. Also notice that the bundle of Ethernet-like cables pointed out in the opening scene no longer seem to be visible. 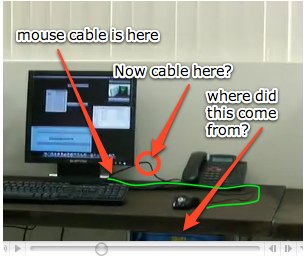 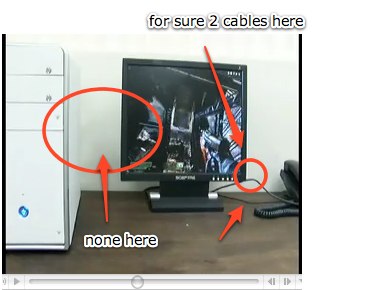 Next the video transitions into showing the Open Computer supposedly running Leopard and the Mac version of Quake 4. What is interesting in this shot is there now seems to be an extra cable running from the right of the monitor toward the area of the desk where the empty wire shelf system sits. That shelf is also no longer empty as it looks like it now has a strange blue box sitting on it. At first I thought the cable near the monitor might be the mouse cable, but in the Quake demo scene you can clearly see the mouse cable moving with this mysterious second cable above it. The thicker cable does seem to be the monitor cable and it is going off to the right not the left. Remember, the Open Computer that is supposed to be running OS X Leopard is to the left of the monitor, not the right. Interesting. 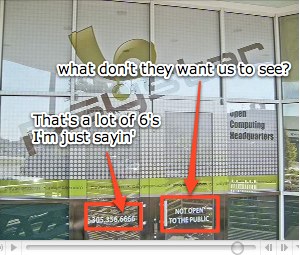 Finally, the closing shot shows the exterior of the Psystar offices. When reports of Psystar and their Open Computer (initially called the Open Mac) first surfaced on the web, several reports noted that they changed their address as many as 3 times. Now that fact alone is strange enough, but throw in a phone number with an oddly high number of 6’s, plus the fact that they seem to want to keep things private and you have the makings of a full blown conspiracy.

Can someone ring up Fox and see if he is available to come down to Florida?

There are 18 comments on Analysis of Psystar’s Open Computer Video: