Ad-Blocking has been a subject of much debate since its conception. On the one hand we want to support the free sites we enjoy, yet cannot stand obnoxious ads. All the more so when they disguise themselves as application windows to mislead the uninformed user. Being on OS X has been a safeguard against these types of ads for people like my parents, who switched this time last year.

This may not be anything terribly new, but it appears at least one company has put a half-hearted attempt at misleading Mac users. While looking up guitar tabs this morning I came across this:

You might say that including both a Windows interface and a Mac interface would be ingenious, except for it’s fatal flaw. The first giveaway is, of course, the large Fisher Price looking buttons sticking out like a sore thumb. The second is it not being an actual window you can interact with. You might say the ad is doing more damage to itself by alerting Windows users that something is up.

However annoying it is, I couldn’t help but chuckle when I saw the attempt. At the very least we can say Apple is finally getting more attention, maybe not the kind we want, but it’s a start.

Listener Jeremy just alerted me to the fact that Apple is giving away iMoive HD as a free download for iLife ’08 customers. As I mentioned on the special edition podcast, if you have older projects that use themes or FX they won’t work in the new version. Mac owners with G4 and older G5 systems will also need to keep iMovie HD as the new version requires a G5 1.9 GHz or better system. I took a look and the page does state, “iMovie HD 6, previously distributed with iLife â€™06, is available for download for those who have purchased and installed iLife â€™08.” The download is 154.6 MB, so I assume it is the full thing. I m not sure if it does a check to ensure iLife ’08 is on the same machine, so it may work for anyone. If you try it and it does, let us know.

A podcast about all things Macintosh. For Mac geeks, by Mac geeks. Special coverage of the announcements made by Steve Jobs at the special event held today on Apple’s campus. Coverage includes the announcement of new iMacs, iLife ’08, iWork ’08, revamped Mac Minis, and the updated Airport Extreme base station.

Join us for Live Maccast chat starting at 9:00 AM PDT and going through the end of Apple’s live event today (8/7). Join us on iChat/AIM in the room: maccast.

Thanks to our show sponsor:

You know, nothing grinds my gears worse than some chowderhead that doesn’t know when to keep his big trap shut… – Planes, Trains & Automobiles (1987)

[ Listen to the interview here ] 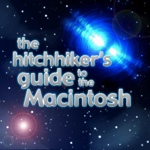 The other day our friend Richard Tanner, who wrote the excellent Hitchhiker’s Guide to the Macintosh (HHGTTM) series for Maccast.com, invited me to be on his podcast. It was a ton of fun and we had a great time talking about my history with Macs and Apple and about how the Maccast came to be. I want to thank him for asking me to be on his show.

As for his show, any of you Mac historians out there you should really check it out. Richard took the complete series he wrote here and adapted it to podcast form. I have to say it came out great. He has also added some more recent content to the series, bringing it up to date with the latest developments from Cupertino. When you get a chance head on over, take a listen to the interview, and be sure to subscribe if you like what you hear.

Microsoft’s Mac Business unit (Mac BU) announced today that they now plan to ship Office 2008 for Mac in mid-January 2008 right around Macworld and not late this year as originally planed. Back in January of this year the company had issued a press release stating the product was scheduled to be available in the second half of 2007. The announcement means customer on the Mac will be waiting a few months longer for full compatibility with Office 2007 for Windows. One of the biggest issues at the moment is that Micrsoft added a new native format to Office 2007 for Windows, the Office Open XML Format. For now, current Office for Mac owners must use the recently updated Open Office XML converter to convert Open XML documents to a format that is compatible with Microsoft Office 2004 for Mac and Microsoft Office v. X for Mac.

While news of the delay may be disappointing to some customers, Microsoft’s Mac BU felt it was the right choice saying their decision based on the Mac BU’s commitment to deliver a high-quality product. “Our number one priority is to deliver quality software to our customers and partners, and in order to achieve this we are shifting availability of Office 2008 for Mac to mid-January of 2008,” said Mac BU General Manager Craig Eisler. “We’re successfully driving toward our internal goal to RTM in mid-December 2007, and believe our customers will be very pleased with the finished product.”

Microsoft Office 2008 is highly anticipated among Mac users as it will bring full compatibility with the new Office Open XML Format. In addition, the new Office will offer the Mac’s answer to the “ribbon” offered in Office 2007 for Window’s. Office 2008 for the Mac will add the Element Gallery which, like the ribbon, is a new UI element designed to help expose functionality and give users quicker access to relevant features when working within an application. Office 2008 for Mac will also include Office Art 2.0, a new shared graphics engine with Office for Windows as well as several new “Mac-only” features. Publishing Layout View to help users create more layout-rich documents like newsletters, fliers and brochures. Ledger Sheets in Excel to make it easier to manage Home and small-business tasks, and My Day, a feature that will help you track priorities and keep up on tasks.

Customers can stay up-to date with the latest developments on Office for Mac and the Mac BU’s other projects by visiting the Mac BU’s Mac Mojo blog at http://blogs.msdn.com/macmojo.

Last week, on the first “I have something to say” segment, we discussed some strategies for convincing our PC using friends and family to make the switch to Mac. In that conversation we briefly touched on what I consider to be maybe the best method for creating a switcher; get them to use a Mac. Now, that can be a challenge as many would-be converts would prefer to try before they buy and most are not willing to drop $600 plus bucks up front for a Mac test-drive. Luckily, many of us have a secret weapon hiding in the spare bedroom, the closet, or tucked away in the garage. It’s your old Mac and chances are it’s still a decent little machine. Anything with a G4 or better processor can pretty much be dusted off, loaded up with Tiger and iLife, and compete with just about any currently sold bargain basement PC. It’s a great way to go. So what are you waiting for? Pass on that OS X Mac goodness. Listener Eric did it and checkout what he experienced.

[Email to the Maccast, 7/29/2007]
I actually converted my parents to Mac when I was in college. Two years ago I gave my mom my year old laptop that ran Windows when I purchased my Power Book for school. My parents are as far from computer literate as they come… they had a computer that was running Windows 98 and was turned on about 3 times a year before I gave them my old laptop.
END_OF_DOCUMENT_TOKEN_TO_BE_REPLACED