Jan
09
Twas the night before MacWorld

Twas the night before MacWorld
And all through the hall
Not a vendor was stirring
No, not at all

The iPhone is here!
It’s coming right quick
We’d been told this before
(A marketing trick) END_OF_DOCUMENT_TOKEN_TO_BE_REPLACED

Wired, on the Cult of Mac blog, posted a thoughtful article about the key part of the Apple Phone’s success—good mobile-phone-to-computer synchronization. It was a point made in a recent post by Engadget’s Ryan Block, and I’d say most people would agree with it.

But from that general and broad notion, I think Wired misses a lot of the progress Apple has already made with their existing applications. They also miss a large potential opportunity and downside of the introduction of an Apple Phone for Apple users. END_OF_DOCUMENT_TOKEN_TO_BE_REPLACED

In addition to being glossy white, the Nintendo Wii is quite Macintosh friendly from a network perspective. Wii will play nicely with your Mac even at this early juncture in the it’s lifespan, with more (wired and wireless) innovations coming shortly.

Today, there are a few notable applications to get you started playing your iTunes music , watching videos, and showing photos using your Wii and all can be ready in a matter of minutes using your home network. END_OF_DOCUMENT_TOKEN_TO_BE_REPLACED

In case they remove it soon the screen shots are here.

Thanks to Oliver for pointing me to these.

Update: You know the more I think about it… could this just be really, really early speculative pre-marketing on Amazon’s part? I mean, we know iLife ’07 and iWork ’07 will be out one day, right? Some clever marketing exec knew if they posted these now they would tons of link love, right? Look closely. There is no “buy” or “pre-buy” button. Instead you can sign-up to be alerted when (and if) the product is available. Maybe this Macworld buzz is a little too loud? My head hurts.

Apple has just released a beta of their widget making tool Dashcode. This is significant for a few reasons: 1. it’s rare that Apple issues a beta version of their software; 2. Dashcode will be made a part of the official release of Mac OS X 10.5 Leopard. Apple made it available to users of Mac OS X 10.4 “in order to get feedback from a broad range of users.”

The idea behind this application—making complex Java/XML/HTML programming simple—is what the Mac experience is all about. Developer tools made more approachable to the average consumer is something a lot of us would like to see. I know I’d love to put a pro-tool like WebObjects to use, but I’ve found the learning curve too steep. Maybe this is an indication of the direction Apple is taking for these kinds of apps.

I’ve never tried previous versions of Dashcode (and truthfully, I’m a fairly infrequent Dashboard/widget user), but I intend to give this one a try. Unfortunately, by downloading and installing it, Apple’s EULA is crystal clear that I can’t discuss anything about it, especially on a blog. Bummer! If there are others in the MacCast community who have used earlier versions of the software and aren’t covered by any legal restrictions, please post your comment below and share your impressions.

The Dashcode beta release will expire on July 15, 2007 (which hopefully also gives us a no-later-than date for Leopard’s release). You’ll need a free Apple Developer Connection login to download it. 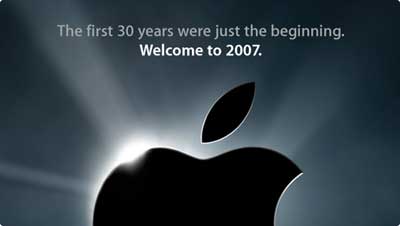 Look what is now on Apple’s home page. I think Macworld is going to be ahh-mazing! If you are going to be around in San Francisco next week don’t forget about my Thursday night events. You’ll find full details here, but at 6:00 PM we have the Mac Podcaster meetup at the Apple Store San Francisco. Then starting at 8:00 PM is the Mac Mingle Party, co-produced with Deb Shadovitz from Mac Efficiency and sponsored by RadTech, TeachMac, iProng, Now Software, and MacSpeech. It should be a ton of fun and I hope you all make it.

On the front page to the Apple website, Apple not only welcomes us to 2007, but they also tease us: “The first 30 years were just the beginning.” Below the text is a black Apple logo, backlit with bright beams of light.

Apple was founded on April 1, 1976 and according to Wikipedia, Wednesday, January 3rd marks thirty years since Apple Computer was incorporated. Of course, we’re all anticipating big announcements from Apple at next week’s Macworld— so this is really a perfectly timed tease. Check back for MacCast MacWorld coverage and be sure to share your thoughts in post comments and the MacCast forum.

Listener Jason pointed me to this video tip he found posted over on lifehacker.com. I figured, since many of you may be new iPod owners, you could find this useful. Personally, I don’t have much love for the iPod earbuds and use a pair of over-the-ear Sony headphones. I do however, carry my original iPod earbuds as backup up, so this tip will help me keep things untangled in my laptop bag. It’s sometimes the simple things that make me smile.